If you have been keeping up with the Chipojo Lab's blog for the past several years, then you should be quite familiar with the work that is being done down here in Abaco. If you have forgotten, do not fret; here is a quick refresher: we are studying the ways in which Anolis sagrei responds behaviorally to the presence of one of its main predators, Leiocephalus curly-tail lizards. This project has involved hours upon hours of filming anoles in the field, coupled with hours upon hours of transcribing videos back in the lab (or house if you are Angie, Dustin, or Maria). All of this work has allowed us to begin to understand how anoles shift their habitat use, activity patterns, degree of social interaction, etc., when under the constant threat of predation.
In June 2010 Manuel and I filmed more than 100 head-bob displays of male A. sagrei in an effort to determine whether the presence of curly-tail lizards also impacts anole behavior on an even finer scale. Specifically, we predicted that predator presence might affect certain physical components, such as amplitude, of the 'broadcast' head-bob displays of territorial male anoles. Our preliminary results were quite interesting, so we decided to collect more data on head-bobs this year! Data collection is already going fairly smoothly, and our head-bob count is growing steadily each day. Below is a video of one such head-bob that was filmed several days ago. Below the video is an illustration (display-action-pattern graph) of how the lizard's head moves though time, with the red line highlighting the head movement of greatest amplitude. 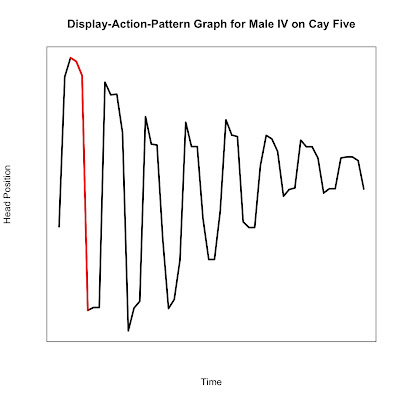 Posted by David Steinberg at 4:57 PM