We Need Your Help

If you follow my blog, you may have noticed that my lab conducts a significant amount of research in Puerto Rico. As a Boricua, working in Puerto Rico provides me the opportunity to work with the flora and fauna that I have become familiar with since I was a little kid. Furthermore, the anoles from Puerto Rico have a long tradition in scientific research, and studies on them have paved the road for Anolis to become a model system in behavioral, physiological, and evolutionary ecology. In Puerto Rico, the general region around El Verde Field Station can be considered a hot-spot in anole research, and the station itself has hosted many of the pioneers of West Indian Anolis biology, including Stan Rand, George Gorman, Paul Hertz, Ray Huey, Ernest Williams, Judy Stamps, Harold Heatwole, and Joan Roughgarden to name a few. In fact, a Google search returned approximately 4000 anoles papers, for which some of the data was collected at El Verde. Like most of Puerto Rico, the field station was badly damage by Hurricane Maria. We, researchers that have worked at El Verde, are trying to raise funds to re-build and maintain the station, if you can help, it would be greatly appreciated.
https://www.gofundme.com/evfs-repairs-and-operating-costs

The University of Puerto Rico was also badly damage, and the AAAS is raising funds that will be used to help the reconstruction of the science buildings. You can donate following this link.
https://www.aaas.org/news/aaas-contributes-rebuilding-puerto-rico-s-scientific-infrastructure?utm_source=64&utm_medium=social&utm_campaign=AAAS-(@aaas)&utm_term=SciPak&utm_content=AAAS

Greetings from El Verde—team Anolis gundlachi rides again! I am back at the station to observe the behavior of female A. gundlachi, joined by two fabulous helpers—Jessica and Phil. Phil joins us on a quick break from the Steen Lab at Auburn University. He’s met some A. cristatellus in Miami before, but he is enjoying getting to know some of the other species of anoles Puerto Rico has to offer, as well as many frogs and a whip scorpion! Jessica is our resident Coqui frog expert, and has become quite the lizard catching champion in our short time together. She will be starting a masters in the fall at the University of Rhode Island in the Kolbe lab—hopefully she won’t be tired of anoles yet?!


My team has a serious dose of perseverance this year. We are trying to stage territorial interactions with free living female anoles, and it is proving to be tricky and trying work. Jessica, Phil and I have tromped all over the forest staging trials—kudos to my team for staying in high spirits even when our lizards evade capture! I am thrilled to report that we have 19 successful trials to date. Here’s hoping we are able to move on to collecting some data on males soon!

I hope you enjoy the picture of us. This is us, fresh from the forest having encountered a torrential down pour. But have no fear, WE CAUGHT AND SAMPLED OUR LAST LIZARD IN THE POURING RAIN!
Posted by Unknown at 7:37 PM No comments:

Welcome to another non-anole portion of the lab! Stephanie and I are currently studying problem solving in Sceloporus consobrinus, the Eastern fence lizard. We are using a similar setup to past testing of anole behavior by others in the lab but are instead testing a lizard native to Missouri. Our biggest challenge so far hasn't been the lizards--it's the weather! Testing lizards held in outdoor enclosures has brought variables we hadn't run into before, so trial and error is the name of the game so far. We think we're (sort of) getting the hang of it! Additionally, we are starting to explore the possibility that the lizards use their tails to produce vibrations that are detectable by insects, so we now have lots more to learn about making and setting up new equipment.

The fence lizards aren't as flashy as anoles, but they have their own splashes of color, especially the males. Another possible project will be testing how much of these blue and black patches reflect UV light. We hope to find out more soon! 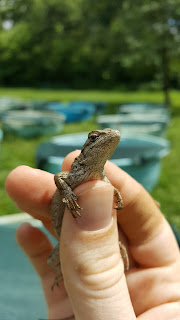 Number 26 is ready for her measurements 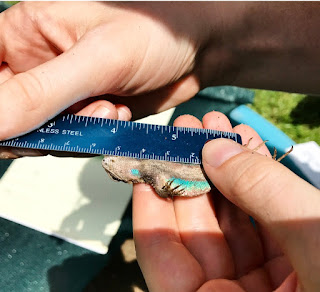 Blue/teal patches on the sides of a mature male 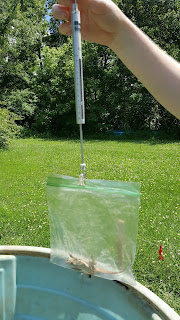 Time to weigh them! 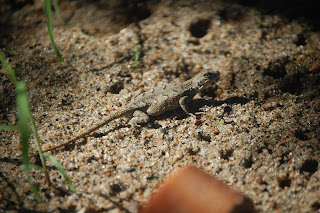 A gravid female
Posted by Han Hoekzema at 3:37 PM No comments:

Eddie, was awarded a Student Research Grant from the Animal Behavior Society. Eddie’s project will evaluate the potential contribution of head-bob displays to species recognition in anoles, and if hybrid populations exhibit head-bob displays that are distinct to the displays of the parental species.
Posted by Manuel Leal at 9:13 PM No comments:

Today (4/22/2017) we joined forces with the Mid-Missouri community and March For Science. Our message was loud and clear "Science is for all and must be supported" Our march and those around world had a common message, undermining science education and research threatens public health, the environment, our livelihood, and the planet--now and for future generations. 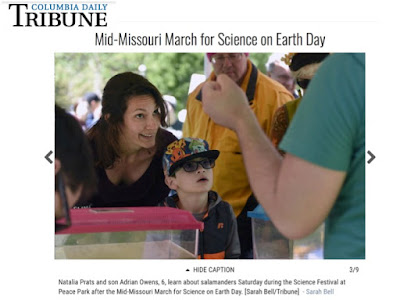 The Chipojolab was also represented at the science march in San Francisco, thanks to Alex.

Posted by Manuel Leal at 8:54 AM No comments:

Han Hoekzema, a senior working in the Chipojolab, and representing the lab at Life Science Week 2017. Han’s poster resulted from her work testing potential behavioral paradigms to evaluate cognitive abilities in fence lizards. If you are wondering how fence lizards measured to anoles, stay tuned, we should know soon.

Posted by Manuel Leal at 2:00 PM No comments: