Convergent evolution has become the trademark of West Indian anoles. Species occupying distinct structural niches exhibit high levels of convergence in morphology (e.g., similar body proportions and general shape), ecology (e.g., habitat selection) and behavior (e.g., foraging and movement patterns) -- what are referred to as ecomorphs.  Decades ago E.E. Williams & colleagues began their studies of ecomorphology and convergence in anoles across the Majar Antilles, and this topic continues to be an active area of significant research. At the present, with the exception of aquatic anoles, convergent evolution has been found across many traits from morphology to physiology… but the run seems to have come to an end.
To make a long story short, I was able to convince Brian a while back that a study of brain evolution in anoles was an easy, low-hanging fruit. In other words, it was ripe for the picking. Initially Brian seemed more interested in the evolution of "play" behavior in lizards, but I was finally able to persuade him that I was ignorant about that subject so he should wait to "work play" for his postdoctoral research. Well, a few years and hundreds of hours of tedious work later, Brian has completed the first study addressing brain evolution in anoles (and one of only a handful of studies of brain evolution in reptiles). Needless to say, the fruit was not hanging that low ... it was much closer to the canopy!!!
Brian's findings are reported in a paper recently published in Brain, Behavior, and Evolution (pdf here). The results show an absence of convergence in brain size between members of the same ecomorph class. In fact, there were no differences between ecomorphs in either overall brain size or in the size of major brain structures after correcting for body size and phylogeny. This is a surprising finding because the brain is often considered to be the substrate upon which selection might act to shape differences in behavioral traits that are commonly reported between ecomorphs. This raises the question, why does the brain buck the trend and fail to exhibit convergence? One possibility is that convergence is present at a finer scale, such as neuron density or connections. Alternatively, we are only beginning to scratch the surface of that big black box called the brain, and it is highly likely that once we learn more about the complexity of the box, we will realize how naïve we were with our early predictions.

Anoles are a well known model system for studying evolution, which is why anoles are commonly found in textbooks to illustrate a diversity of evolutionary processes. I am happy to say, that finally, they got their TWO SECONDS of fame as a system for studying animal behavior. Below is a short clip from the well known Canadian TV Documentary Series "The Nature of Things" in which anoles were presented shoulder-to-shoulder with the most common key players of this type of TV documentary. All I have to say, chimps and/or crows beware, a lizard might be taking your spot soon.

Below are a few pictures documenting the behind-the-scenes action that took place during the filming of the lizards by CBC. This was my first experience dealing with television cameras, and believe me when I say it was a long day. The crew was great, but talking to a gigantic camera that is pointing right at your face was a nerve-racking experience. It was amazing how much equipment was brought in and how much filming occurred at our lab in order to produce the few minutes of final product that are shown in the documentary.
Posted by Manuel Leal at 3:40 PM 2 comments:

7th World Congress of Herpetology (B)

If you are interested in the possible mechanisms shaping the evolution of lizards' brain, you must be at Ace's talk tomorrow (Brian Powell, at 2:30, at Irving K. Barber 195). The slide below illustrates the two main mechanisms that he will be discussing, using the anoles of Puerto Rico as a model system. 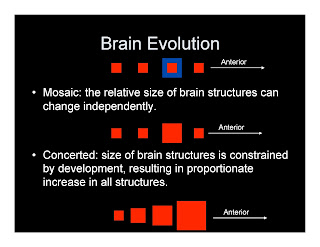 Posted by Manuel Leal at 2:00 AM No comments:

Today, "El Nuevo Dia" published a nice article covering our recent study on the possible impact of climate change on Anolis cristatellus throughout its range in Puerto Rico (pdf can be found here). For those brave of heart, you can watch one of the most  awkward conversations ever recorded to see us discuss the findings of the paper.

Hi from Vancouver, Canada. The 7th World Congress of Herpetology began today, and the Chipojo Lab is nicely represented by two of its best (looking) members, Dave Steinberg and Brian Powell. This meeting brings together herpetologists from around world (more than 1600 registrations), and it is characterized by a humongous number of talks and posters covering a diversity of research topics. Tomorrow, our own Dave will take the podium to rock the evening session by presenting his work on the modulation of signal properties as a behavioral mechanism to optimize signal detection.  All I have to say, if you are in Vancouver, you should not miss his talk. Please stay tuned for updates from British Columbia.