The Ghost of Competition 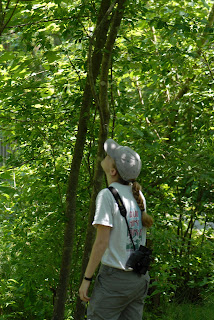 Yesterday I visited Elise, better known as “the anole lady”, to "help" with lizard catching. According to "the anole lady", it was a relatively successful day. We spotted a couple of previously marked males, and a handful of new individuals from both sexes. For someone used to working in the West Indies, I would have categorized such a performance as way bellow par; but it looks like working with A. carolinensis in natural forest around NC is a different story.
Which brings me to next point. Anolis carolinensis is widely distributed, from Florida to Tennessee, however much of what we know about this species with regards to its ecology comes from studies from the southern range of its distribution (e.g., Florida, Georgia, Louisiana). Although, Sandy Echternacht, at UT Knoxville, has been studying A. carolinensis in Tennessee where he has found that their behavior is different from what is commonly observed in FL. 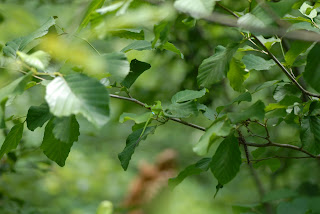 In Florida a significant amount of research has been done to evaluate the impact of A. sagrei (a somewhat recent invader) on A. carolinensis. One of the main findings is that A. sagrei seems to be displacing A. carolinensis from the lower portion of tree trunks. To my surprise nearly all of the activity we observed yesterday took place relatively high, above 3 meters.  Moreover, although we saw a nice amount of movement, in one instance a male travelled approximately 5 meters, none of the individuals ventured lower than 1.75 meters. Instead, individuals moved from tree to tree by the using connecting braches or by jumping between them. How common is this behavior (i.e. selection of relatively high perches in the absence of congeners) is an open question waiting to be answered. Its response might shed some light into our current understanding of the outcome of the interactions between A. carolinensis and A. sagrei.  For example, if we were working in Florida, I would have told Elise "you see, A. sagrei is displacing A. carolinensis"; however no A. sagrei here, which brings me back to the title of the blog. Working with competition is not for the faint of heart. It takes some clever thinking to design an elegant experiment, and even then you are always left wondering if the species' evolutionary history might partially account for the observed pattern.
Posted by Manuel Leal at 9:08 PM No comments: 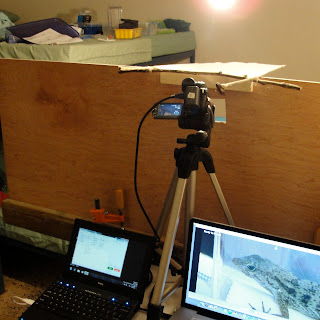 In my last post, I promised an update on the experiments that we are currently conducting in the field. While Alex is toiling away (filming lizards while they sprint along a track) in the basement of the station, I have my own experiment underway in one of the bedrooms. I am testing whether moving objects with certain physical properties (e.g., amplitudes) are more effective at capturing the attention of individuals of several species of Puerto Rican anole. This will let us know whether there might be any underlying differences (or similarities) in the motion detection systems of these lizards. I am nearly finished with two species and will let everyone know how it turns out when I know myself! Ok, back to work ...
Posted by David Steinberg at 12:26 PM 1 comment:

An update from Southern Pines

Look who decided to join us at Gum Swamp today! It's a Matt-lizard holding a carolina anole. 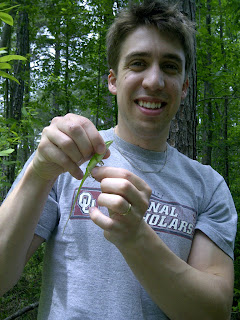 We saw and marked 3 individuals today, including one female and two males. Matt (my husband) spotted the female! What a natural; he should consider making more visits to Southern Pines in the future! With the goal of trying to understand more about green anole social interactions (and specifically, mating behavior), having Matt's help with spotting the locals was much appreciated. Thanks Matt!

And look who was watching us not too far away... 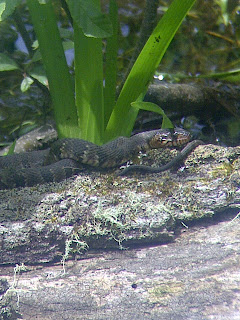 Greetings from Puerto Rico. Alex & I are hard at work conducting “lab” experiments inside the field station, but we have also had the fortune (and need) to spend some time outdoors. We’ve seen most of the species on the island so far, including the beautiful Anolis cuvieri. Below, you can find a photograph of a pair that was copulating during our dinner a few nights ago. It may be difficult to tell from the picture, but both animals are in pretty bad shape – fresh wounds and scar tissue. In fact, most of the individuals of this species that we’ve encountered look worse for the wear, with multiple injuries, bite marks, and scarring. In my personal opinion, they should take it easy and start trying to enjoy their lives. 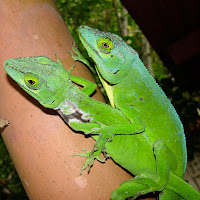 And stay tuned for updates regarding the aforementioned experiments! They are moving along & I will post more about them in the coming days ...
Posted by David Steinberg at 5:09 PM 3 comments:

The adventures of Anolis carolinensis

The adventures of Anolis carolinensis in Southern Pines, NC

~As a potentially useful test of mate recognition systems, wherein former mates recognize each other and base subsequent mating decisions on that ability[1], I sought to study the carolina anole, Anolis carolinensis.

Jenssen & Nunez (1998)[2] have shown us something interesting about this species: A. carolinensis males skip mating opportunities, bypassing females that even signal their apparent receptivity. That is, females arch their necks conspicuously (a maneuver thought to show sexual receptivity) within close viewing distance of the male, who then decides to leave!

To see if these males are discriminating among local females on the basis of recent sexual history (eh hem, maybe these skipped females are previous mates?), I drove to Southern Pines, NC to watch anole behavior. Amid the beautiful long-leaf pine forests here, life isn’t so bad. -->

Except when you regularly lose sight of your study subject as s/he walks 20 ft. up a tree!

Trying to assess the mating behavior of North Carolina anoles has been challenging. Mostly, I have not been able to keep track of individuals to the extent hoped for. But when the bushes do rustle with signs of lizard activity, I’m there! So far I’ve seen some cool interactions, including one copulation lasting 25 minutes (!), and two escalated fights between territorial males (e.g., one male [the Victor] jaw-clenched the other’s head for nearly 10 minutes!)…wish I had that on film to show you.

Anyway, I thought males might’ve been capable of recognizing females/former mates (and hey, maybe they can!) but I can’t really tell yet if males are bypassing mating opportunities, as has been previously shown for a different population of anoles. Without that cool hook as a foundation, it’s hard to say what would be next for this study plan…

For now, I have 2 more field weeks to try to watch lizards : ) -Will be back to the blog soon!
elise

PS. check out who decided to hitch a ride on this beetle's head, observed in the park today! 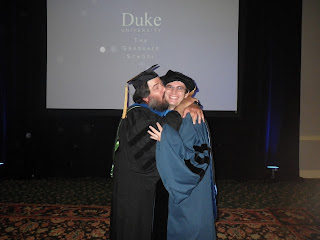 It is official, Ace is ready to fly the coop and we are all helping him to take the leap. My intention was to give him "una patadita de buena suerte" to help him out of the nest, but instead he asked for a BIG kiss. I do realize that leaving the safety net of graduate school can be a daunting task. However, Ace is ready for a new challenge.
CONGRATS!!!!!!!!!
Posted by Manuel Leal at 2:42 PM No comments: 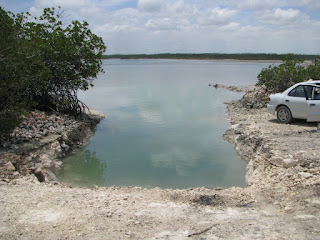 In previous years we have had some difficulties maneuvering the trailer to launch the boat and/or get all the gear (motor, gas tank, ect) from the trunk of the car to the boat. Well finally the ramp has been re-done. Please see above the new boat ramp. The best description I can give is a water hole. My prediction is that there would be a lot of trailers and cars that will end-up at the bottom of the hole (i.e., six to eight feet under water).
Posted by Manuel Leal at 6:36 AM No comments:

Firing on all cylinders

Today was another busy day at Snake Creek.  Jason and I visited two more islands, Buddy and Y5, and re-visited, 6, 5, 1, and X3. First, the good news: the density of anoles on Buddy is comparable to last year. The same is true for 5 and X3, and possibly 6. The density of 1 is in the low side; we found only eight anoles and three curlies. The news for Y5 are not as positive, after a lot of searching we only found two anoles (one male and one female). I am hopeful that the population size is larger than two, but I would be highly impressed if the population size is bigger than 15. 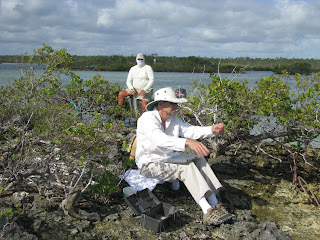 Dave hard at work preparing sticky traps that are used to census insect density and diversity at our study sites. 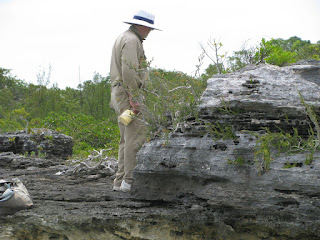 Tom with his paint-gun ready to census anoles at N3, which is one of the islands from the founder experiment.

The field season for our Bahamas project began yesterday. This is the 5th year of the experiment and our first "real" visit after Hurricane Irene visited this region in August of 2011. As you might recall, the path of Hurricane Irene was directly over Snake Creek. Therefore, we are all extremely anxious to see if Irene had a major impact on the anoles and/or curlies. In general terms there seems to be relatively little damage to vegetation of the islands, however, the densities of both A. sagrei and curlies seem to be down in most of the islands we have visited.  Also, so far there is only one cay (X0) where we have found no lizards.
Posted by Manuel Leal at 9:22 PM No comments: