We recently acquired a portable field metabolic system, a gizmo that will allow us to measure 02, CO2 and water loss, in the field.  If it works, measuring physiological variables without the need to bringing lizards to the lab. Arianne is very quickly becoming the expert, and because a photo is worth a thousand words, no need to say how excited she is about the potential questions that she will be addressing in the near future.
Posted by Manuel Leal at 9:29 AM 2 comments:

Most of our posts are on lizards, particularly anoles. However, this semester Josh has decided to tackle a project evaluating the spatial abilities of the jumping spider (Phidippus audax). Here are a couple of photos of Josh’s progress, including carefully attaching a fruit fly to a hair-strand, a critical step of his experimental design. Stay tuned for updates.
Posted by Manuel Leal at 6:53 PM 1 comment:

On our way into the forest one morning, Deborah made a great "spot" (Noun, Ellee's Field Dictionary: to visualize an anole in a particularly difficult or interesting location). Check out this A. evermanni hatchling enjoying the decorative vegetation around El Verde Field Station! 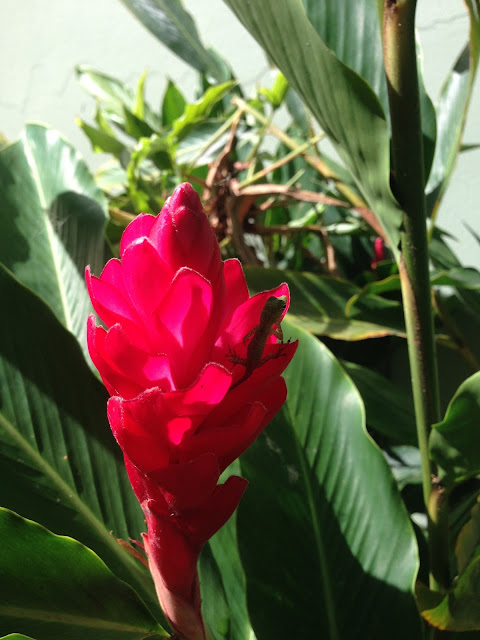 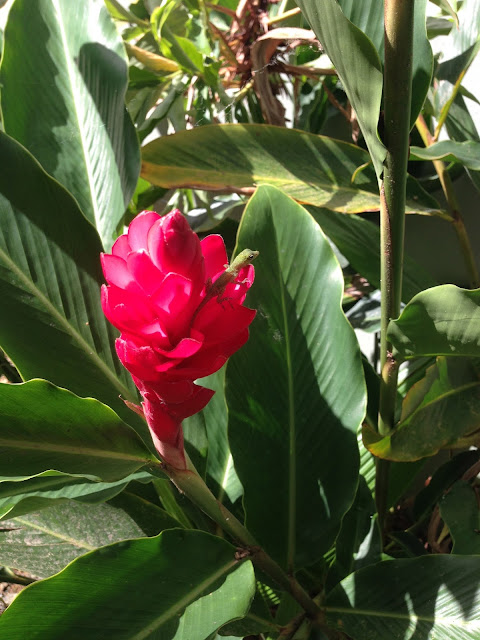 Posted by Unknown at 3:56 PM No comments:

It's All In The Little Things

When you spend a lot of time learning about a single species, it is easy to start generalizing. You begin to assume that the individuals are more or less the same. Sure, there is a bit of variation here and there, but your brain seeks categories and determines rough averages:

“Most individuals are this big or that big.”
“In most cases, individuals will behave in this manner.”

But the more time you actually spend with the individuals in their day to day lives, the more you realize that the “bit of variation here and there” can be both substantial, and fascinating.

Deborah and I are trying to catch glimpses of this variation by observing the natural behavior of female Anolis gundlachi lizards. We know each of these lizards by “name”—they have unique IDs that enable us to identify particular lizards day after day. Over time, we get to know each of them. We start to see patterns.

We know who is always out—rain, shine, Ellee tromping past, they are always there, on that tree or this rock.

We understand that there are some lizards we will never glimpse until we sit on this rock, that far away, and watch a particular bunch of dead palm leaves with binoculars for 10 minutes. Give her that time and space, and sure enough, she will poke through the leaves and scamper over to the dead tree she seems to like.

And most annoying, we know which male is likely to tromp through the whole plot and mess up all the behavior observations as the females go skittering back into their hidey-holes. “Here comes O1/O2,” we sigh into our tape recorders. “Yep—yep she’s gone.” Poor, lonely O1/O2.

It’s the minor variation that makes things interesting. Why is this female out when the others have hidden? Why does this female run from this male, but the others don’t?

Collecting this kind of data is hard work. It takes time, practice, and a whole lot of patience. Losing lizards under rocks is frustrating, praying to the rain gods only seems to work on Tuesdays, and, on some days, lizards sit on the exact same perch all day long. But it’s the only way to truly capture that variation, and begin to wonder how it plays a role in the lives and history of the animals we all study.
Posted by Unknown at 1:39 PM No comments:

Today I shall tell you the tale of a lizard known as “Blue/Blue.” She’s actually called “Female, LeftB030/RightB031, Tree 3, Plot 1, 6/21/16,” but I know all that matters little you.
An Anolis lizard, she takes hails from the tropics, but of her many behaviors, female-female competition shall be today’s topic.

When Blue/Blue’s name first came to be, she spent most of her days on a Tree called SP-3.
A modest sierra palm, she seemed happy enough, surrounded by neighbors, and insects, and a whole manner of forest-y stuff.
One of her neighbors, known to all as White/White, lived on Tree 4, but seems to have disappeared during one night!
Whether she carried her bags to a neighboring plot, or met a maniacal lizard cuckoo, I’m afraid we know naught.
Regardless of reason, there resulted a great tizzy, and we suddenly found our day of observations quite busy.

It would seem that Tree 4 is a great perching prize, as we found it was coveted by a great many eyes.
Green/White eyed the vacancy from Tree number 1, but decided it not worth the battle she might not have won.
Green/Green looked upon the great tree with envy, as she and White/White had never been friendly.
Orange/Yellow crawled down the base of tree 2, shook her head and thought “that’s just too much territory for you.”
Yellow/Yellow had always been restless, tree 5 being easy to defend and leaving her quite quest-less.
But it was Blue/Blue who moved quickly to claim the new prize, much to the surprise of neighborly eyes.

On the roots of Tree 4, Blue/Blue perched with pride, but soon found herself drawn to the other side.
Green/Green pranced about, exploring by root and by vine, not content to remain on her palm leaf and pine!
Blue/Blue took offense and began doing push-ups, as she had come too far and cared not for territorial screw-ups.
But it seemed her efforts would be drawn thin, as Yellow/Yellow scampered up seeking to join in!

Blue/Blue would not give up her prize so easily, as she was 45mm long and therefore not measly!
She push-upped, and dewlapped, and stuck her tongue out, daring her foes to seek other routes.
It seemed Yellow/Yellow would be first up to battle, her own pushups making her palm perch rattle.
They darted and bit and ran round in circles, and if lizard faces could show fatigue, they’d both have been purple!
It lasted ten minutes and filled me with fright, but eventually Yellow-Yellow gave up, and left the fight.
With wounded pride she slunk back to tree five, promising she’d be back when she felt more alive.

But the woes of Blue/Blue were far, far from finished, as Green/Green remained, causing a menace.
She push-upped and crawled closer, drawing Blue/Blue ever nearer, thinking her chance to own tree number 4 had never been clearer.
Drawing un-lizardly strength from her ectotherm soul, Blue/Blue quickly retaliated, never forgetting her goal.
Darting this way and that, she harried her opponent, declaring “This is my throne, and you shall never own it!”
She jumped to the palms that were Green/Green’s home turf, and incited an interaction that became quite a tryst.
Five minutes it lasted, all puffed chests and tongues out, as these two former neighbors battled it out.
Blue/Blue emerged triumphant and Green/Green did run, and with some victory push-ups she shouted “What, leaving the fun?”

She returned to her tree, all pride and all glee, taking stock of the goods in her new territory.
She slept soundly that night, nestled amongst the leaves, thoughts of her triumphs filling her dreams.

It was good that she rested,
for as you all know,
the Usurper will always be tested,
by friend and by foe.
Posted by Unknown at 1:39 PM No comments: