Signaling environment from an anole perspective

The Anolis dewlap is a recurrent topic of discussion on Anole Annals. This is not surprising considering that it is commonly view as playing a role in many aspects of social interaction, including species recognition and even sexual selection. Although, I am unaware of empirical studies supporting sexual selection, in the context of female choice.

A recent post by (Ian Wang) asked the question, "Does This Dewlap Go With My Signalling Environment?”   In order to answer this question I would encourage the readers of Anole Annals to have a discussion of what is really is an "anole's signaling environment."

The paper by Ng et al. (2012) presents some interesting results, and I would encourage everyone to read this paper. The amount of data presented in this paper is impressive, with the authors combining molecular, dewlap reflectance, and satellite data (i.e., GIS data), to evaluate if there is a relationship between dewlap traits and climatic variables across populations of A. distichus. As the precision of GIS data increases, the ability of exploring questions at a finer geographical scale is becoming more common. This paper nicely illustrates this approach. Additionally, A. distichus is a nice system for the study of dewlap variation. In fact, in my opinion, one of Al Schwartz (1968) best anole monographs describes all sorts of geographic variation in the distichus complex. This monograph is a must read for all Anole Annals fans, with beautiful plates and a lot of natural history data.

One of the main findings of Ng et al. is that geographic variation in dewlap coloration is correlated with the "habitat types" in which populations are found. Interestingly, habitat type seems to have a stronger signal than geographic or genetic distance between populations. I have to admit that I am biased, but this is music to my ears. However, before we jump into further conclusions, I feel that it is important to take a step back and evaluate the question I posed at the start of this post – namely, what is the "signaling environment"?


But, does this mean that if we measure light intensity (i.e., irradiance) alone, we are done characterizing the signaling environment? The short answer is no. There is also a chromatic component to dewlap detection, which means that we need to know not only the intensity of the light, but also the color shape of the background (i.e., radiance). I would like to raise a word of caution and suggest that for now GIS data might not be a feasible approach to addressing questions of dewlap evolution as it relates adaptation to "signaling environment".

Also, I have learned the hard way, what makes a dewlap brighter or darker is not its reflectance. Although the light reflected off a dewlap has an obvious contribution to overall brightness, the largest contribution typically comes from the amount of light that is transmitted through the dewlap.

Going back to the paper by Ng et al, this is an interesting first step and can serve as a springboard for further research. But for now, I believe that when using coarse measurements of habitat type, the jury is still out with regard to the effect of “signaling environment” on dewlap diversity. A logical next step for this type of approach should be to evaluate whether data collected at the micro-scale, which at the moment is our best proxy for what is relevant to the lizard's "signaling environment," offer similar results to those provided by the large-scale data used in their study.

Finally, the dewlap is one the coolest traits of anoles, and compared to all the work that has been done in anoles, it is mind-boggling that we know so little about its function. This includes a lack of experimental evidence to support the widely common view that the dewlap is used during the process of sexual selection. Unless sexual selection is used in a broad fashion (see Leal and Losos 2010 for discussion), it might be premature to discuss the role of sexual selection in dewlap evolution.

After a very long and tortuous path, our paper on CTmin finally came out today in The American Naturalist. If you are interested in reading it, here is a pdf. This is one of those studies that requires an in-house description to fully appreciate its content, particularly because two of my friends were critical players in the story of this project’s development. As they did their best to convince me that it was not such of a great idea to expend energy on this study.
A long time ago, I told Alex that we should measure CTmin (the lowest temperature at which lizards can maintain coordination) for the introduced population of A. cristatellus in Miami. His response was along the lines: "Ray has shown that the physiology of lizards is relatively rigid, so why should we waste our time?" I tried to convince him that Miami is cold for a Puerto Rican. Being from Minnesota, he was not convinced. I then mentioned that anoles sleep on top of vegetation, usually leaves, which probably limits their ability to escape cold weather. But, that was not good enough for him either. This should not be surprising because he seems to be predisposed to reject my ideas. Finally, I approached Ray, and asked him the same question. His answer was similar to Alex's: “Physiology is very rigid. Why are you going to waste your time?”

Although, both of my attempts to get my friends on board with this project failed to produce a positive response, I decided to go ahead and prove them wrong, in part, because one of an advisor’s jobs is to keep the students (Alex) humble. So, after a few more discussions, Alex agreed that I would bring A. cristatellus from Miami (he was not going to waste his time) and that we would measure CTmin to compare to his data from Puerto Rico. In March of 2010, I went to Miami to collect a series of individuals of A. cristatellus. Nearly two weeks after collection, Alex and I got together to measure CTmin. Because Alex was still so skeptical, we decided to make a friendly wager, which is commonly in the form of a free lunch or dinner in our lab. If lizards from Miami had a lower CTmin than lizards from Puerto Rico, Alex would treat me to a nice lunch; however, if Alex was correct, I would be treating him to several lunches (needless to say, I felt that this was money in the bank). After measuring a few lizards, it was clear, the individuals from Miami were active at temperatures at which individuals from Puerto Rico were like popsicles. Below is the original graph, which got me a free lunch and which was of the first version of this paper when it was submitted to review. 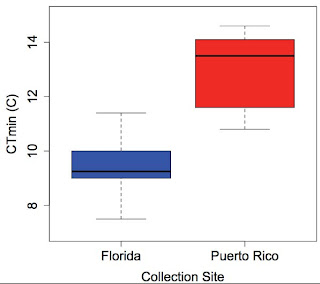 In a nutshell, we found differences in CTmin between populations. After collecting data on CTmin during the fall, we submitted the MS. However, although both reviewers found the manuscript promising (see below), they asked for additional data, including CTmax for both populations.


" To summarize, this is a promising study that suggests that (i) cold tolerance has diverged genetically between populations of lizards in merely 30 generations, and (ii) that thermal changes can result in rapid evolutionary responses in tropical species. If the authors could provide the additional data required to solidify these suggestions, a revised manuscript could make an important contribution."

We moved forward and collected the additional data, some of which is shown below in a new figure.
In the end, this has turned out to be an interesting story. It is one of those cases in which the results are what you should expect when you "think like a lizard". On one hand, Ray is correct -- physiology seems to be relatively rigid because behavior buffers the lizards from selection. But for a sleeping anole, over a leaf in a winter night, behavior is not such a useful buffer. Thus, we might have found the Achilles heel of behavior. It has also provided the opportunity for Alex to reflect on his initial viewpoint, and to learn that maybe once in a while it is ok to listen to your advisor.  So it turns out that "el que ríe ultimo, ríe mejor" 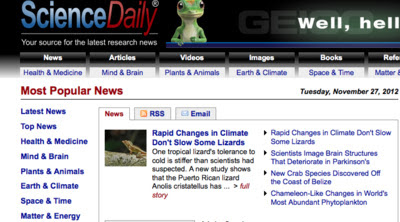