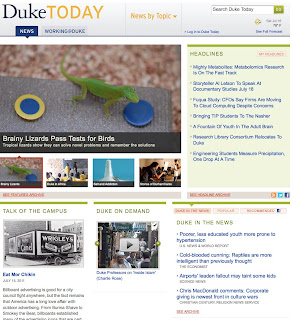 If you are familiar with my blog, you have noticed that my posts mostly cover our fieldwork and/or lab experiments. However, today I would like to make an exception to share the news that the Chipojolab has gone viral. To my surprise, the results of our study evaluating behavioral flexibility (or as we jokingly refer to it, brainy lizards) have received a "little amount" of media attention. Below are few sites covering our "story".

As a baseball fan I believe that the "Ten Run Rule" might be applicable to coverage of this story. 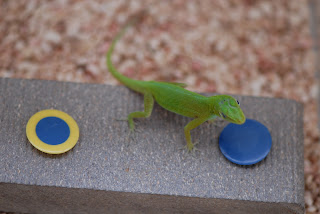 If I have grabbed your curiosity and you would like to read the paper, this is a link to it. Also, below are a few movies of the "brainy lizards" in action. Yes A. evermanni's brain is small, as illustrated by the picture -- a testament that size is overrated. 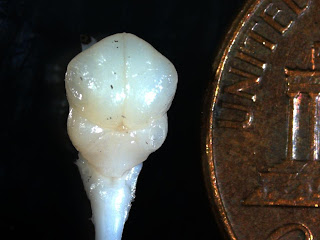 Sorry for all the shakiness of the first movie, a little too much coffee in the morning. However, this one has a strong sentimental value because it shows the second successful trial. I was not smart enough to record the first trial, which might also explain the shakiness. At least to me, both video #1 and 2, illustrate a somewhat unexpected result. Look closely at the way the lizard is dislodging the disc, it is using its snout as a lever, which is a complete novel behavior, not the modification of a natural striking behavior. This is what is commonly used as a benchmark of high levels of behavioral flexibility, in birds and mammals.


I would also like to stress a few points that are not in the paper, but that nevertheless played a major role in the development of this line of research.
--This has been a labor of love. For many years I, and over the last couple of years, Brian, have invested a nice amount of energy in developing methodologies to evaluate the cognitive abilities of anoles. We have built a nice number of gadgets, from remote-control choice boxes to PVC mazes. After all of our toils, we have come up with something surprisingly simple that works. As a side note, our next door neighbor and cognition consultant, Rindy, provided valuable insights into how to implement this methodology.
--My “friends,” who are quite familiar with anoles, constantly told me, "what you are doing is a waste of time; there is no way that anoles will perform behavioral trials for food." However, I am a little stubborn and this time it seems that I might have been correct.
--This methodology was developed in response to reviewers who criticized a grant proposal by pointing out that there was not a clear behavioral test to evaluate if anoles are able to discriminate colors or patterns. To my surprise, we now have the methodology, and just recently the grant. It looks like this time Lady Luck was on our side.
--Last but not least, if you like this paper, I highly recommend that you stay tuned. We are currently working on a series of manuscripts addressing cognitive abilities and brain evolution in anoles.
Posted by Manuel Leal at 11:00 PM